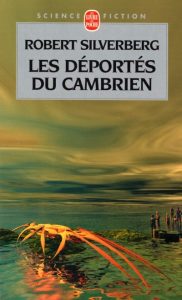 It is not good to be a political opponent in the beginning of the XXIst century. Are you arrested and you are immediately sent in the most secure prison of the planet: the Cambrian, that is to say one billion years in the past, at a time when terrestrial life doesn’t exist anymore, only as primitive life form in the oceans.

This prison is the safer because the ticket is without return. The Hammer, this diabolical time machine, works in only one way. A single ticket for a cell whose we threw the key away.

That’s in a desert world that a few hundreds prisoners live from the scraps sent by their jailers, and perish in loneliness. In this unusual prison environment, there are only two possible ends: madness, or death.

Then, in the irregular swell of exiled prisoners, come a man, Lew Hahn, who doesn’t seem to be a political prisoner. Who is he? Why had he been sentenced? What happens in this far future for such an individual had been sent? Is he bearing hope for those desperate men?

I wasn’t all het up to read this novel. I was afraid that it could be a showcase of marginal political ideas and a pseudo-philosophical jumble.

I was wrong. Robert Silverberg concoct us a poignant novel about these men whose we eradicate all slight hope to defend their ideals, to whom we remove all hope of return. A touching behind closed doors in a prison universe transformed gradually as lunatic asylum.

At the end of the reading waits you a deep reflection about the forgotten and excluded ones of our society.