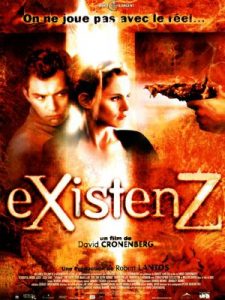 I really had a hard time try to write this article so much strange is this movie, a real UFO (Unidentified Filming Objet) which throws us in an almost normal world to the edge of reality.

All begins when Allegra Geller (Jennifer Jason Leigh), video games programmer, introduce to a video gamers panel her last creation: eXistenZ, a virtual universe in which the users, connected in a network through their Pod, evolve and discover the rules gradually. But barely the demonstration had begun when a guy, armed with a strange organic weapon, shoot Allegra yelling « Death to the daemon! » and damage the Pod containing the unique version of the game.

Then a frantic flight for Allegra begins, accompanied with her friend Ted Pikul (Jude Law, Gattaca), to avoid death but to equally save her Pod and her game.

Because the Pod, a kind of modern video console, is a living creature which Allegra must heal to get her data back. Moreover, to save eXistenZ, she has no choice: she has to connect to the network and plunge in this virtual universe in which you loss a part or your identity in aid of one of an avatar.

There’s no doubt about it, David Cronenberg, fantastic master (The Fly, Scanners, Dead Zone…) knows his stuff to conceive weird and oppressive ambiance. And eXistenZ isn’t an exception! From beginning to end, our familiar universe is jeopardized, with some fantastic touch, enough to make us uncomfortable and plant seeds of doubt about reality, but not enough to be sure that what we are thinking is real.

There are those weird Pods, living creatures from genetic engineering to stock and process data, interacting with people through organic cord plugged in vertebral connectors. There are also those strange organic gun, assembled with poultry bones and shooting teeth as bullet. There are all those mutant creature encountered from time to time, making us wonder if this world is real or imaginary.

Because the main theme of this movie, which may have delighted Philip K. Dick, is this continuous self-assurance that we are not sure of anything. At no time you can say: « I know what it is about! I understand! » Even the end of movie don’t break with that rule. We believe we understand and Cronenberg plant the last seed of doubt which let us uncertain.

So, if I consider the scenario, I’d say that movie is a minor miracle.

On the other hand, from a ambiance point of view, I’m reserved. The “fantastic” side is perfectly mastered, but I was pretty disturbed by the permanent sexual connotations:

All this to say that I don’t understand this attraction for sex in this movie which, in my opinion, don’t bring anything to the story. But I’m not a great psychologist and there is certainly that avoid me.

Despite this last point, this movie is a real success I’ve already seen many times and I’ll see again with pleasure.

Science fiction is not about the freedom of imagination. It’s about a free imagination pinched and howling in a vise that other people call real life.