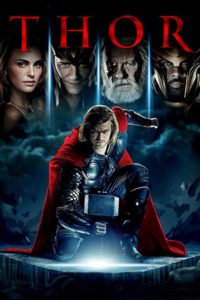 Thor, the God of Thunder of the Scandinavian mythology, is on the way to succeed to his father Odin at the head of the Asgard kingdom.

But he is a mad dog and his arrogance and his insouciance, which push him to declare war with the Frost Giants of Jötunheim, make him banish from Asgard to Midgard (Earth) until he were worthy to be king.

On Earth, Thor must now learn to live a mortal life and reconquer his Hammer. He will be helped in his quest by astrophysicist Jane Foster whose he will fall in love. He must also arrest his brother Loki whose machinations will propel to the Asgard throne.

Whosoever holds this hammer, if he be worthy, shall possess the power of Thor!

Among superheroes, Thor is probably my favourite. Good looking guy, totally badass and full of humour, I always enjoy to follow his adventures.

This first opus, fourth movie of the M.C.U.[1]Marvel Cinematic Universe. phase one released in 2011, is an introduction to the most charismatic character of the future Avengers. And for an introduction, this is a real success!

As opposed as we can expect for a usual superhero, Thor, in this movie, is fragile and desperate when he figures out that he is no longer worthy of his Hammer. This fragility makes him more sympathetic  and we appreciate to see him evolving, changing behaviour until he reaches enough maturity and wisdom to get Mjöllnir back.

Add an excellent actor, Chris Hemsworth, who until now had played only minor roles[2]Notably in the Star Trek movie in 2009, from J. J. Abrams, where he embodies George Kirk, James Kirk’s father., and you will have the main reasons which made of Thor the blockbuster we know with 450 millions of dollars receipts.

But Chris Hemsworth is not the only actor to carry the movie on his shoulders. Many actresses and actors assist him: Anthony Hopkins (Odin), Tom Hiddleston (Loki), Rene Russo (Frigga), Idris Elba (Heimdall). Even Natalie Portman is excellent in this movie[3]I’m a little rough, but I have some hard time to forget her performance in Star Wars 🙂 !

Shortly, but I can imagine that you have understand, I loved that movie and, if you are part of the troglodytes who have not seen it yet, I can only advise you to watch it as soon as possible.

It pays to be obvious, especially if you have a reputation for subtlety.