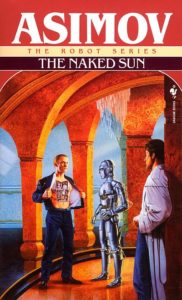 After his exploits on Earth[1]See The Caves of Steel., here is our favourite inspector again on Solaria, a Spatian planet where the phobia of others reach its climax: individuals meet the others only by holo-video, marital relationship being done very rarely in a mutual aversion feeling. A planet where the density of robots is the highest of the galaxy.

This is in that incomprehensible society that inspector Baley have to solve a murder which can’t have been perpetuated, Solarians couldn’t even imagine beeing with another person.

The only possible suspect is the wife of the deceased, Gladia Delmarre, who can’t have commit the murder neither. More of that, a robot has been found on the crime scene, disturbing clue in a society which is completely dependant on them.

Inspector Baley will need all his genius to solve this inextricable enquiry and especially not to succumb in front of the vastness of the exterior and to face off the naked sun.

From a book to the following, we go from one extreme to the other. In The Caves of Steel, we evolve in an overpopulated society where intimacy is very low and where robots has been banished from the cities. In The Naked Sun, the world is largely underpopulated[2]Just twenty thousands inhabitants in all over the planet. and individuals are completely robot-dependent, with thousands unities per inhabitant. Total culture shock for Elijah Baley.

Furthermore, our inspector will face his worst fears, his worst phobias, and he who can’t stand the view of the Great Exterior will be obliged to get there frequently to investigate. By the way, phobias are in the centre of this story, because the Solarians aren’t outdone, them who have the phobia of other people, unable to be in presence with another individual without feeling great fear. And to investigate, Baley will learn to question his suspects by holo-vision, without any physical contact, and this fear of the other will be in the middle of the plot. But I won’t tell anything else…

Fortunately for Lije, there is still the humanoid robot R. Daneel Olivaw who will assist him in his task. Main character of the robot series, Daneel stays similar to himself, logical, rational, honest and always prompt to be helpful beyond the needs of the Three Laws. And in this opus, the relationship between the robot and the human evolve. Mistrustful in The Caves of Steel, the latter learn to trust his companion and to treat him as a friend, relationship which will develop in that way in the following novel, The Robots of Dawn. I have to say that I particularly like that character and he is one of my favourites in the science fiction literature.

Other important character in this book, Gladia Delmarre will provoke in the inspector deep feelings that will be crucial, at first for the solution of the enigma, and after in the following novels, The Robots of Dawn and the excellent Robots and Empire.

So, although the motives of the story are still the same, Isaac Asimov had concocted an excellent investigation against a backdrop of social criticism that I ardently recommand.

Notice that this novel was adapted for the television in 1969 as an episode of the British anthology series Out of the Unknown.

Science fiction may be defined as that branch of literature which deals with the response of human beings to advances in science and technology.