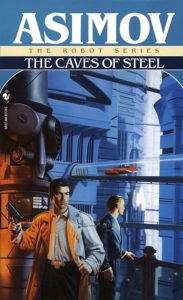 On this overpopulated Earth, the agoraphobic men live in giant underground anthill-cities with many dozens of millions people. Covered with domes, they protect their inhabitants from the view of the sky and the vast outside.

The Spacers live on about fifty underpopulated and asepticized worlds where no germ, no threat exists. Despite their germophobia and their exasperating superiority complex, they posses an embassy in the New-York suburbs, Spacetown, in which they live as recluse without – almost – any contact with the earthlings.

But the unthinkable has arrived in Spacetown: the murder of an eminent Spacer! Only a earthling could have commit that crime. But it’s also impossible: almost none of them can enter in Spacetown.

Thus, the tough investigation is entrusted to the inspector Elijah Baley, to whom is enlisted an unusual assistant: a Spacer named R. Daneel Olivaw… with a “R” like “Robot”!

In this first opus introducing the inspector Elijah Baley, Isaac Asimov realized the perfect alchemy between crime novel and science fiction. He depicts an earthling overpopulated and agoraphobic society where intimacy is almost impossible and the respect of taboos a survival rule.

In this under-the-dome universe, away from the vastness of the outside, Elijah leads his enquiry at a breakneck pace. We discover here the scheme of his adventures: revelations, on many occasions, of what he believes to be the truth, followed by his humiliations facing his ridiculous allegations, and finally the consecration of his genius and his meticulous researches.

Because at the first sight, Lije Baley is an anti-hero. Not at ease with himself, not always be thought highly by his hierarchy, obsessed by his social status, his privileges and the decency. To that you may add an almost perfect robot assistant, as much in his appearance as his precision of his own investigations.

However, when you pass that first sight, Lije becomes appealing et shows himself full of compassion and respect for his fellow citizens. Plus, he is a good father and a good husband.

But above all, he is a talented inspector, honest and whose the frankness worth him several setbacks with his superiors. He is also motivated by the presence, at first very irritating, of this robotic assistant who, Lije is convinced of that, threatens his job.

I must say that I became particularly attached to R. Daneel Olivaw who is present in many novels and short stories. His inhumanity,highlighted – paradoxically – by a perfect human form, but whose face doesn’t show any emotion, will transform, page after page, into an ideal, honest, loyal companion… in short: a friend!

If there is such a phenomenon as absolute evil, it consists in treating another human being as a thing.