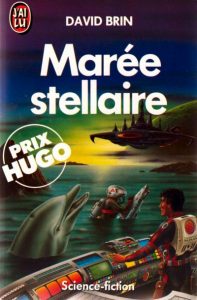 From its voyage on the edge of our galaxy, the Streaker, spaceship composed almost exclusively of Neo-Dolphins, discovered an abandoned fleet of vessels, each of them as big as a moon.

When it informs Earth of its discovery, every species of the Five Galaxies set off in pursuit of it to extract the fleet position. Indeed, they all think that fleet announce the return of the Progenitors, mythical missing race which would have been at the origin of all the intelligent species of the galaxies.

A merciless fight between each race goes off to acquire, with all the relentlessness of the religious fervour, the information for her own benefit.

I have only one thing to say about this book: WOW!

The pace is hellish; the intrigues are fascinating, gripping, each chapter ending with a cliffhanger; the characters are endearing, or provoke hate or disdain, but in any case are impossible to feel indifferent about; aliens have shapes and psychologies very diverse, and their fights are epic, monumental, outstandingly destructive.

At the bottom of this novel and the others of the series[1]Sundiver, The Uplift War and the Uplift trilogy., there is the uplift process by which a sentient race genetically modifies another race to give her intelligence. By this way, the new specie, the “client”, owes to her “patron” one hundred of thousands years of servitude after which she could herself modify another race and become a “patron”, etc…

David Brin had concocted to us a high quality space opera, in the midst of a strange universe where Mankind is a minor race in a galaxy preyed to religious madness.

I think you have understood that I have loved (and read many times) this book which appear at the place of honour of my bookcase.

Reality is that which, when you stop believing in it, doesn’t go away.