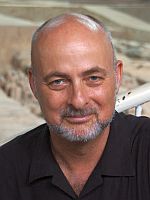 Graduate in 1973 of a bachelor of science in astrophysics from the CalTech (California Institue of Technology), then a PhD in 1981 in physics from the California University, David Brin was by turns research engineer in the field of semi-conductors (Hughes Aircraft Research Labs), physics teacher at the San Diego University et exobiology consultant to the Jet Propulsion Laboratory.

His writer career (science fiction and scientific popularisation) begins relatively late (in 1982). But the quality of his writings placed him in the top of the bill of american authors, especially with The Factor (adapted to the cinema by Kevin Costner) and his famous Uplift series (including The Uplift trilogy).

We can notice his frequent collaborations with Greg Bear and Gregory Benford, notably for one of the sequels of Foundation (by Isaac Asimov). The three of them are affectionately nicknamed the group of « Killer B’s ».

Since 1990, David Brin dedicate himself entirely to his writing career and lecturer.

Science fiction may be defined as that branch of literature which deals with the response of human beings to advances in science and technology.