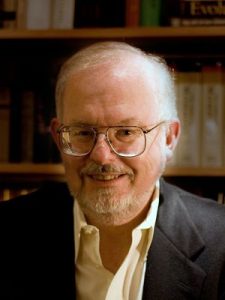 Born in 1951 in San Diego, he’ll obtain his Bachelor of Arts diploma in 1973 from San Diego State University. He was by turns reporter, drawer, bookseller and technical consultant for television (Prophets of Science Fiction, The Twilight Zone). In the S.F. field, he is mostly known to be a hard science writer, even if he made some incursion in fantasy (The Serpent Mage) and horror (Psychlone).

His writing career begins relatively early (he starts writing at 13 y.o.) and his first short story, Destroyers, was published in 1967 even though he wasn’t adult. But it’s in 1983 that his career take off when he received the Hugo and the Nebula awards for his short story Bloodmusic which will be novelized in 1985.

It’s also in 1985 that he’ll confirm his writing talents with his novel Eon, followed in 1988 by Eternity, which form, with Legacy (1995) his most famous and popular trilogy.

We can notice his frequent collaborations with David Brin and Gregory Benford, notably for one of the sequels of Foundation (by Isaac Asimov). The three of them are affectionately nicknamed the group of « Killer B’s ».