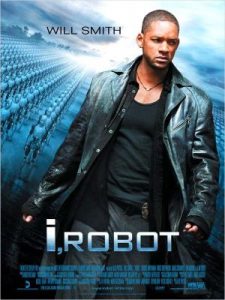 In 2035, the technology is everywhere in this future society and the robots take a very important place. The U.S. Robotics, detaining the robots production monopoly, is about to launch its new model, the NS-5 “Nestor”, of the fifth generation. More skilled, more efficient than the older version, he is also provided with a very human facial mask.

In this asepticized and over-controled universe, the detective Del Spooner investigate about the suicide of Dr. Alfred Lanning, the most eminent roboticist and as well one of his friends. Suicide that he think to be a murder in which could be involved a NS-5 robot.

Since he began to try to discover the murderer, troubles accumulate and the robots’ dysfunctions that threaten to be lethal are more and more suspect. Especially as the U.S. Robotics CEO, Lawrence Robertson, seems in a rush to close the enquiry and to destroy the evidences.

Assisted by the Dr. Susan Calvin, experienced U.S. Robotics robopsychologist, Spooner will do everything to find the responsible robot and to put a stop to the silence conspiracy.

I think this is good to replace I, Robot in the work of the inspiring writer, the genius Isaac Asimov. Because if the scenario isn’t directly from a novel nor a short story of the “Good Doctor”, it is rather an evocation of his robotic universe and a patchwork of ideas from varied short stories.

Then, the detective Del Spooner, played by Will Smith, is, in my opinion, clearly inspired by inspector Elijah Baley[1]We found Lije Baley in the novels The Caves of Steel, The Naked Sun and The Robots of Dawn. from the science fiction detective novels of the Robots series. Same dislike for robots, same obstinacy in the direction of his enquiry and same intelligence in his reasoning.

There is also Dr. Susan Calvin, embodied by the cute Bridget Moynahan (The Recruit, Lord of War), robopsychologist of U.S. Robotics we found in almost all the robots short stories. She is in charge to ensure that the robots don’t divert from their programmed behaviour and prevent acts opposite to the Three Laws.

Evidently, the Three Laws of Robotics, firmly implanted in the positronic brain of the robots and which are at the beginning of their behaviour, are also present (and brilliantly exploited). We also can notice, but I won’t tell too much about this, the presence of a Zeroth Law[2]Zeroth Law whose Asimov started to describe in Robots and Empire, and which ends in in Foundation and Earth. that I let you discover to not reveal too much the plot.

The main thread of the scenario is constructed around the wonderful short story Robot dreams in which a robot surpasses its programming by wondering about its robot condition and by searching for auto-determination.

We get back to the same scheme of a robot conscious of itself and willing to deliver the other robots from “slavery”.

Fan of Asimov’s work, I was extremely critical before seeing this movie, wondering how Hollywood could have massacred the Master’s work.

Well, I was pleasantly surprised by the result. Not only the Three Laws are used with brio, but the Asimov’s spirit lingers on this movie. Of course, at the beginning, I found really weird all these robots which don’t behave in accordance with the Three Laws and I was irritated. Then, eventually, the scenario brings a perfectly logical answer by imagining an extension to this famous Laws.

Besides the good scenario which give equal parts to action and reflection, the special effects are breathtaking, highlighting perfectly the high-tech side of this world.

But most of all, the expressions of the Sonny robot are so natural and his mimicking is so realistic that we could take him for a human being. Ans this robot, in my opinion the real main character, did enormously for the success of the movie.

Shortly, a wonderful science fiction detective story that I recommend to everyone.

Never let your sense of morals prevent you from doing what is right.