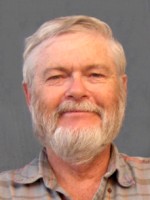 Gregory Benford is a physicist, plasmas specialist, and teach physics to the Irvine University in California.

In the field of science fiction, he excels particularly in hard science. His most popular series is the Galactic Center Saga which count currently six novels.

We can notice his frequent collaborations with Greg Bear and David Brin, notably for one of the sequels of Foundation (by Isaac Asimov). The three of them are affectionately nicknamed the group of « Killer B’s ».

Two possibilities exist: Either we are alone in the universe or we are not. Both are equally terrifying.