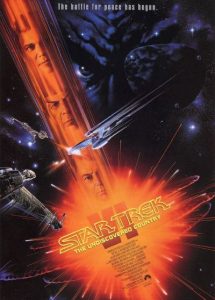 There is a little law circulating in the Star Trek fans community: the odd movies are duds and the even ones are masterpiece. Well, we can say that, in the current case, the law is verified. ST VI is a jewel that I let you discover.

The Klingons are in turmoil. Praxis, a mining moon of their home-planet Qo’nos, has just exploded, threatening the Empire in the short term. Chancelor Gorkon decides to take the discussion with the Federation over to save his people. Captain Kirk is then chosen to escort him to the conference center to sign a treaty.

But not everybody is ready for peace and, hardly the Klingons are returning to their ship after a diplomatic dinner, the Enterprise shoot photon torpedoes to the Kronos and harm it irreversibly. While the ship is on distress, two Starfleet officers are teleported aboard and kill the Chancellor. Kirk is then suspected having orchestrated this dreadful crime and must endure a klingon trial which will send him to the Rura Penthe penitentiary for the rest of his life… or worse.

But, knowing their innocence, Kirk and McCoy will do anything to escape and reveal the conspiracy which want to prevent peace.

It’d been a long time, since the second opus ST II: The Wrath of Khan, that I haven’t seen a decent Star Trek movie. From the beginning, I was sent into transport by the excellent scenario livened up by battle scenes, short but effective. Because ST VI isn’t based on big special effects and explosions, but on an police enquiry – from both sides, Kirk and Spock – to discover the whys and wherefores of the conspiracy.

What I also love a lot in this movie is that the Klingons are not just some random brute uneducated and quick to fight, as they were viewed in the previous movies – shoot first and ask questions after – but rather civilized, cultured and full of self-control. A turning point for the franchise which will devellop and expand the klingon culture, especially with the serie Star Trek: The Next Generation.

Another interesting point : no manichaenism at all. No kind humans in one side and nasty Klingons in the other side. The roles are very blury and, whether it be Humans, Romulans or Klingons, no one is black or white. We can’t say which character is in the plot or not. Even Kirk doesn’t escape to the grey because at the beginning, he is opposed to the peace, he prefer « let them die ». It gives an additional dimension to the characters.

Shakespeare fans aren’t outdone because the dialogs are sprinkled with quotes of this british author declaimed mostly by General Chang.

Cry havoc! And let slip the dogs of war!

I offer a toast. The undiscovered country… the future.

It’s useless to say to which point I love that movie and I’m unable to say how much time I saw it. So, now it’s your turn ! Engage !

For the record, we can notice that the klingon counsel of Kirk and McCoy during their trial on Qo’nos, Colonel Worf, is embodied by Michael Dorn, the actor who will play Lieutenant Worf in the Star Trek: The Next Generation series. However, the lineage between them was never clarified in the franchise.

Another nod to trekkies, it’s a true pleasure to see Captain Hikaru Sulu in charge of his own starship, the U.S.S. Excelsior.