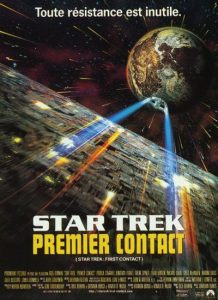 While she patrols on the edge of the Federation, the Enterprise receives a S.O.S.: the Borg, those formidable mi-organic mi-cybernetic extraterrestrials, are en route to Earth. The fleet is mobilized to counter them before they modify galactic History.

For the Enterprise, no choice but follow them in the past, three centuries earlier at the dawn of the first contact between Humans and Vulcans, and prevent them to assimilate people of the Federation before its constitution.

Realisation as a family

is Star Trek movies, the eighth of the franchise, is a family business because it is realised by Jonathan Frakes, the Commander William Riker, second officer of the Enterprise.

It’s the first movie for which Frakes places himself behind the camera. And for a first try, it was a master stroke because until this days, First contact is probably the best Star Trek movie ever.

But this success isn’t surprising after all. Jonathan Frakes has already tried one’s hand at realisation in the series The Next Generation, in which he signed some excellent episodes (Sub Rosa, The Chase, Cause and Effect, The Offspring…) but also in the later shows Deep Space Nine and Voyager.

Frakes will also realised in 1998 – to stay in the Star Trek universe – the excellent although controversial Insurrection.

After long years of televisual silence, the Borg, those formidable Federation’s enemies, are back to wipe us out.

Those beings mi-biological mi-artificial, whose the activity is organized par a collective consciousness administrated by a “Queen”, have only one goal: assimilate worlds and entire species in their collective to achieve bio-mechanical “perfection”. They are ruthless, implacable and no one can resist.

In the past, Captain Jean-Luc Picard was assimilated by them (episodes 3×26 and 4×01 « The Best of Both Worlds ») and, since, he is haunted by this traumatic experience – offering by the way an terrifying opening scene in a Picard’s nightmare.

And this is this relation which is the focus of the movie’s plot, because to stop them and prevent the Federation to be nip in the bud, Picard will do anything and be as determined, ruthless as them, even to sacrifice himself.

Because in this opus, Picard is not like the captain we know. Usually cold, distant, self-controlled, his painful past comes back to the point and, for the second time since his assimilation, he is overwhelmed by emotions. The first time, in episode 4×02 « Family », just after being saved by his crew, he fell apart in tears in his brother’s arms, overwhelmed by helplessness feeling when he faced the Borg.

Here, six years after his assimilation and his rescue, he gets his revenge and explodes during – notably – a remarkable scene in his office where Patrick Stewart shows – if necessary – which excellent actor he is, going from a muted anger to a cold determination in a blink of an eye, performing with mastery a Jean-Luc Picard beset to killing frenzy.

The cocktail of success

Of course, the success of a movie isn’t due to only one actor and, even if Patrick Stewart is remarkable, he doesn’t carry the film on his shoulder. Indeed, we get back to the perfect alchemy between the characters which did the success of the TV show.

Moreover, the scenario is well structured, one of the bests about temporal paradoxes I saw those last years. Because First contact isn’t just an action movie where special effects are the only worth of interest. No, we have here some smart science fiction, worth of the vision that Gene Roddenberry, the creator of the series, had about our future.

To this, we must add a spectacular music signed by a Jerry Goldsmith in great shape (who already had orchestrated the music of The Next Generation and Voyager and will sign the next movies Insurrection and Nemesis).

I’ve already say that previously, and I think you understood anyway, First contact is for me the best Star Trek ever filmed. All is present for the cocktail to be perfect: a very good scenario, actors in great shape, an atmosphere sometimes oppressive, sometimes explosive, with a significant amount of humour.

It’s very simple, I’ve stopped counting the number of times I saw this movie, and always with the same pleasure.

Another very important character in the show, the starship Enterprise goes, into First contact, through a complete lifting after her destruction during the previous movie Generations in 1994, and is saddled with the letter “E” (yes, there had been damage since Kirk 🙂 ):

From now on, the Enterprise is a Sovereign class starship and have a more martial form, with a darker color. Furthermore, she is more heavily armed to face the many threat about which must face the Federation: the Borg (since Wolf 359), the Dominion, the Cardassians, the Romulans…

A deep restyling which give an impression of power but equally of majesty, grace and perfect beauty.

« I will not sacrifice the Enterprise. We’ve made too many compromises already, too many retreats. They invade our space, and we fall back. They assimilate entire worlds, and we fall back. Not again. The line must be drawn here! This far, no further! And I will make them pay for what they’ve done! »

« And he piled upon the whale’s white hump the sum of all the rage and hate felt by his whole race. If his chest had been a cannon he would have shot his heart upon it. […] Ahab spent years hunting the white whale that crippled him; but in the end, it destroyed him and his ship.