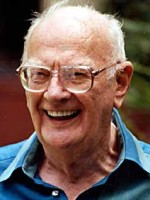 The Clarke’s literary work is mostly characterised by his will to be as close as possible to the scientifical reality of the period when he write his stories. He is then a master of hard science.

But the epic dimension isn’t absent from his stories, far from it, and Clarke has always known how conceal poetical and technical aspects. Then, his work is recognizable, making us emotionally vibrate as the same time as anchoring us in the real world.

His writing career begun during the second World War when he was R.A.F. officer, radar specialist, who collaborate to elaborate the detection system of British army. It was during this period that he was rewarded by a literary award organised by R.A.F. But it was in 1946 that he published his first professional short stories, Loophole, in the April issue of the Astounding Science Fiction magazine.

The war, apart from it allows him to make his debut in literature, interrupt the studies of a brilliant person. In this way, despite his intellect, it’s only just after the war he will obtain a firs–class degree in mathematics and physics to the London King’s College.

Astronautics pioneer, his major work in scientifical field is the concept of geostationary satellite, ideal relay for telecommunications, developed in the Extra-terrestrial Relays article in 1945, when the first satellite, Spoutnik, will be launched only twelve years later!

From 1950, he devotes himself to literary with success, with notably the Rama series and, of course, the Odysseys which make him become a worldly known writer. His work is, by the way, overabundant and he excels in short stories (whose a lot of them will be rewrite by other authors, or adapted in novels).

In 1954, he met two loves: Elizabeth, who will become his wife, and Ceylan (Sri Lanka), an Indian Ocean’s island under British protectorate (at this time) where he will move in definitely in 1956.

He will carry out a double writer and lecturer career all over the world.

Since 1989, epoch they diagnose a neurological illness (the post-polyo syndrome), he moved almost exclusively with a wheel chair.

People have a tendency to confuse us because we both write cerebral stories in which scientific ideas are more important than action.

Isaac Asimov, in “I, Asimov”

Arthur C. Clarke is part of the writers dear to my heart, who I always read with pleasure, even if, at the end of his career, his productions were lower in quality and leave more place to collaborations with other authors (Paul Preuss, Gentry Lee, Stephen Baxter…)

But he gave us so many masterpieces (novels and also many short stories) that he remains one of my favourite authors.

Other novels (in chronological order):

Science fiction is not about the freedom of imagination. It’s about a free imagination pinched and howling in a vise that other people call real life.