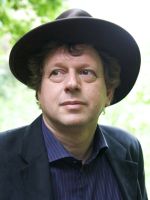 Peter F. Hamilton is a British science fiction writer who made scientifical studies, without terminate university because he had to work very early in a factory and to deal with his ill mother.

Reading a lot of science fiction work when he was young, he begins to write in 1987 short stories of this genre which he will publish in some magazines. In 1993, his reputation increases with the publication of what will be his first trilogy (Greg Mandel Books): Mindstar Riding, followed shortly afterwards by A Quantum Murder and The Nano Flower.

But it’s in 1996 that Hamilton signs the first volume of his masterpiece: The Reality Dysfunction, which forms with The Neutronium Alchemist and The Naked God, the huge half-S.F., half-fantastic novel Night’s Dawn.

After that, the success come one after another with some novels like Fallen Dragon, then the Commonwealth saga, followed by the Void trilogy, as many stories which place Peter F. Hamilton in the rank of the uncontested masters of modern science fiction and space opera.

Never let your sense of morals prevent you from doing what is right.