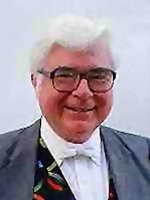 In 1987, he retired definitely from research and he dedicated himself to his writing career and his N.A.S.A. and U.S. Air Force consulting work. Because of his works, he writes mainly hard science and more precisely about gravitation.

Not well-know in France (only two of his novels have been translated), he is relatively famous in the U.S.A., where he had published twenty or so books, whose eleven in science fiction (some in collaboration with his wife Margaret and his daughter Julie).

If there is such a phenomenon as absolute evil, it consists in treating another human being as a thing.